Mercer Caverns, one of three caves in Calaveras County, is open for guided tours, year round. See deep underground in this cavern filled with a large array of cave formations like stalactities, stalagmites and flowstones. This cavern also won the Paris World’s Fair for its display of the rare cavern formation: flos feri.

An early local newspaper, The Calaveras Weekly Citizen, published this notice in its pages on September 12th, 1885:

“The town of Murphys has been considerably agitated by the discovery of an immense cave near that place.  The cave was discovered by Walter Mercer a couple of weeks ago.  It is situated about a mile from Murphys near the road from that place to Sheep Ranch.  The cave has only been partially explored, but enough has already been discovered to justify us in saying that it will prove a major attraction to tourists and curiosity seekers.  The cave is in a limestone region, as in fact are all of the great caves of the world.  Some of the apartments are of immense dimensions.  It has been explored to the extent of seven or eight hundred feet.” 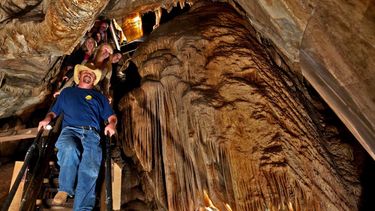